Why did I need to evaluate code at runtime in C#?

Recently I have been working on a project which required me to develop a decision maker. A decision maker is a system where you define a set of rules where each rule can evaluate the input parameters, and based on that provide an output. So, basically, a big if-then-else system.

The idea is that the client can enter their own input parameters. And, of course, then things got complicated, as we figured out that the conditions that need to be evaluated will be complex, as well as rules that will often contain input parameters inside some mathematical formulas. We needed to find a way to allow users to enter mathematical and logical expressions that can be evaluated on demand.

There is an amazing project called Roslyn from Microsoft. The goal of the project is to provide open-source C# and Visual Basic compilers with rich code analysis APIs. It enables building code analysis tools with the same APIs that are used by Visual Studio. This is indeed awesome. Not only that, but it’s completely open source.

For ASP.NET Core it is a part of the Microsoft.CodeAnalysis.CSharp.Scripting NuGet package.

The project requirements were:

If any rule condition was evaluated as true, some action needed to be taken, which is irrelevant for this blog post.

Code example of the solution

Let’s build a small console application that shows the concept of a potential decision maker in ASP.NET Core 2.1. The source code is available on GitHub.

Create a new project in Visual Studio. We will build a Console Application (.NET Core): 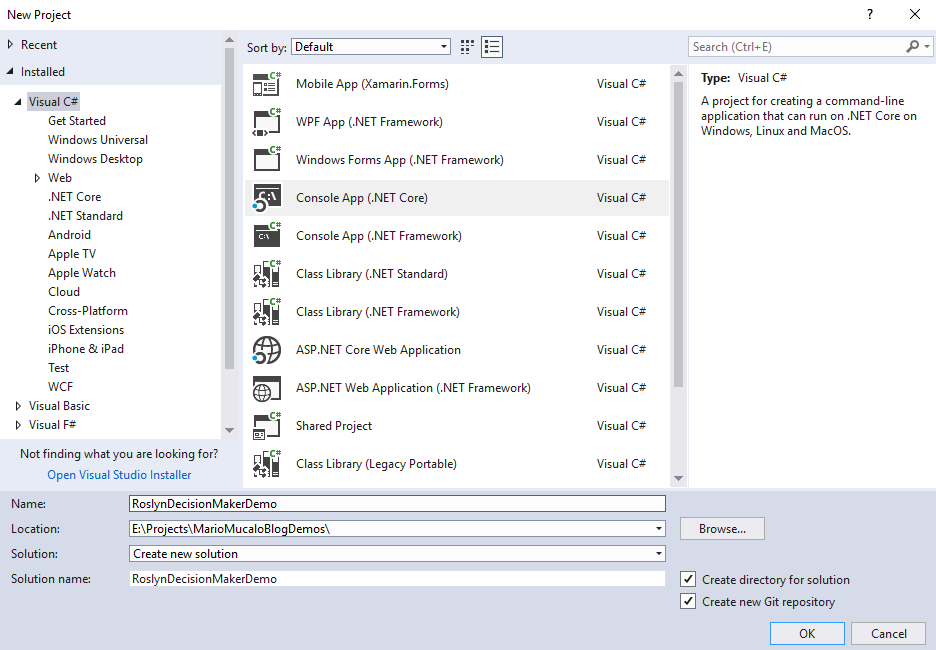 The input variables x and y have their respected values, and we’d like the calculated variable area to have the value of x * y. Three different rules that we will be evaluated are defined in the rules array.

Two different ways of approaching the problem will be demonstrated.

Roslyn allows running C Sharp scripts on the server. Our scripts will depend on the actual input parameters provided by the user which means we cannot know how long the script will be or what it will look like. We will use the possibility of states, and run each command one by one keeping track of the state. Each command will just continue from the existing state.

First it is necessary to create an empty state and add all input variables:

Note that variables are added by actually running the command e.g.: var x = 40;

These variables with their respected (and calculated values) remain on the state so they can be reused later.

In a similar way, we can add all the calculated variables:

We need to evaluate each of the rules. To do this, we need to continue execution from the state and just use the expression we need as a command. As such command is added to the state, Roslyn evaluates it and stores it in state.ReturnValue. The code for evaluating all rules looks like this:

In this solution the goal will be to manually replace all variable values with their respected values and then evaluate the actual expression. This is a more crude way to do the same thing which is not necessarily using all the features Roslyn provides, but does demo the Evaluate function.

First it is necessary to calculate the values of calculatedVariables:

Replacing of the variables is done here in a very crude way and it will cause issues if you have variables that have names that are subsets of each other (e.g. variable ‘a’ and variable ‘area’). Building a “smart” way to replace variables is not relevant for this post.

It is necessary to go through each rule, replace both input and output variables with their respected values and evaluate the rule as a boolean value:

Note the difference – when using state, we are not replacing or tampering with original string values. All the changes and calculations are done inside Roslyn. In approach with replacements and formula evaluation we do tamper with input data, so if this is important, please pay attention to it.

This is a basic proof-of-concept on how Roslyn (or, if you like, Microsoft CSharp Scripting) can be used to build a very simple decision maker.

I strongly suggest you to test it out with different input values, different variables, add your own, try with multiple conditions… See where it can take you.

What if Roslyn cannot evaluate?

This is a good question. Very often you do not have control over the input and cannot know for sure whether it can indeed be evaluated (or even parsed).

This is why it is strongly suggested to keep any evaluation code inside try-catch blocks:

If, for example, more complex formulas in my calculated variables are needed, like using square roots or mathematical powering, System.Math would need to be available to users. Using the WithImports option allows you to do this:

Check https://github.com/dotnet/roslyn/wiki/Scripting-API-Samples for more examples on what you can do.

What I needed was just basic evaluation of basic math and logical expressions in C# at runtime. And for this purpose Roslyn (a.k.a. Microsoft CodeAnalysis CSharp Scripting) did the job superbly. But looking at the documentation, provided samples and possibilities, I cannot but wonder in how many places this could be used and how far it could take me. I will probably explore it in some other future projects I have planned, and will probably write about the findings here. But, so far, Roslyn looks like a very powerful tool indeed.